....Those are the feelings you experience with the birth of a lamb and the loss of the ewe.   Little Athena was born on day 140 following her conception, a bit on the early side for a first time lambing ewe.  She had a sister but unfortunately she never took her first breath, too early for her underdeveloped lungs I guess.  We were not expecting lambs this early.  I discovered the little one before bed, all dried off and fed.  Freyja did a wonderful job.  I put them in their own pen and all seemed good.  The next day they both seemed perky and healthy.  The only concern I had was that Freyja had not fully expelled the placenta, it remained hanging off her hind end.  I consulted the vet, not to worry until it had been another couple days.  The following day, two days after Athena's birth, Freyja was getting some odd symptoms.  Several times that day I consulted the vet and treated her with what seemed appropriate.  She did not improve.   By that evening she was dead, leaving this little infant in our hands.
What amazes me about Freyja was that she was so very stoic when I imagine she must have been in tremendous pain.  My suspicion was she had a twisted intestine.  She stayed alert and caring for her baby up until the very end, with no sign of weakness.  It was hard to tell anything was wrong. Our last moment with her before she died (Tom and I both witnessed her last breath) was her lying peacefully with her little one curled right beside her.  It was like she was waiting for us to come to the barn to take her little one so she could go; that her baby would be cared for.  How could a mother be more loving of her baby than that?

Freyja leaves a big hole in our life but her baby is doing her best to fill it.  She is a spunky, healthy little gal;  full of life.  I promise to do my best to take good care of her as her mother would have wanted. 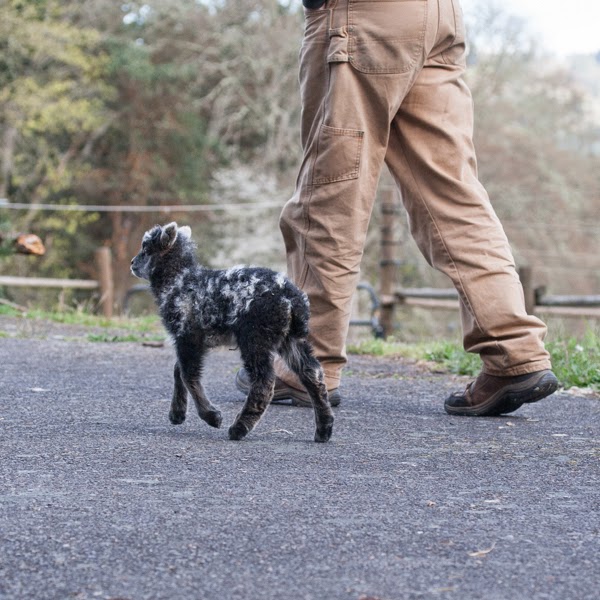