Chalk it up to education, my mother always says when things don't go as planned.  Seems we are always learning new things around here.  Just when you think you have it all worked out on the farm mother nature throws you another curve ball.  This year I have learned more than I ever wanted to know about internal parasites related to sheep. 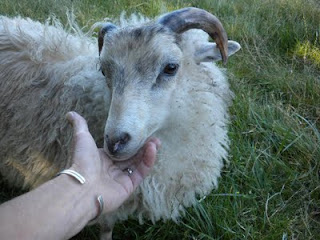 We have always done the traditional parasite treatments and more recently have tried to use the dewormers a bit more sparingly, using more of the FAMACHA system on the adult sheep.  This helps avoid your worms becoming resistant to the dewormers.  I am also aware of the explosion of worms around the time of lambing so try to treat accordingly.  But this year things, for various reasons some which I will explain, seem to have gotten a bit away from us.   First off we had more lambs than in past years, 16 in total.  Secondly,  as you may have noticed if you live in the Pacific NW, we have had an unusually wet spring/summer.  Moisture, combined with warmth, is a perfect environment for the hatching of parasites.  Sheep are generally susceptible to worms.  They were meant to graze vast areas of land, not the same little paddock week after week.  They graze close to the ground where those little wormies like to hang out.   Another happening fact, like other organisms in our life, they are  becoming resistant to our treatments.  Many areas around the country, particularly the south, these parasites have become resistant to the conventional dewormers we typically use on sheep.  From my talks with other shepherds around these parts I believe it is starting to happen here as well.   Anyway, this year we were able to see first hand how destructive these buggers can be on little lambs.  Although we have not lost any lambs, most of ours have developed varying degrees of anemia, and, in spite of our rich feedings, are not putting on the usual weight.  We've also had a few cases of lamb pneumonia and plenty of coughing lambs.   As the weather is drying we now finally getting a handle on it.  We have done some strategic dewormings and are monitoring the anemia closely, although that will take a bit of time for them to recover from.
So from the lessons of this year we will make a few changes for next year.  We will have less lambs  for sure, that has many added benefits including more time with each lamb so in the end they will all be more friendly.  We have less animals in total, lower stocking rate equals less parasites. We will put newly weaned lambs on "clean" pasture, that is a different paddock than the moms were on and hopefully not as contaminated.  We may also have our lambing a bit later in the season so the pastures are dryer, something mother nature will have to help us with too.  And we will monitor very closely.  Certainly I will always have more to learn, but isn't that one of the joys of life!
Posted by mctavishfarm at 4:22:00 PM No comments: Seems like it is always something.  You want the grass to grow, and then it does, but then it goes to seed.  Some of those nasty seedheads stick to soft, fine fleeces and then you have a mess.  Nobody wants to spin a fleece with prickly seeds in it.   So much for fine, soft fleeces with low micron counts!  It is a difficult problem to deal with.  The tiny black burrs grow against the woven wire fence and the little ones like to reach through the fence (remember grass is always greener....) then the seeds stick to their fine neck fleece.  No fun to pluck out.  This year also seems particularly bad for those foxtails.  They are the ones that can ruin your socks with one run through the pasture.  We have mowed them, bagged them and tried to get rid of the seed heads for a few years now and they seem to get worse every year.  Short of  field burning I am not sure what else to do.  And of course the sheep don't like to eat them so the problem continues.  I guess we'll be resigned to sitting in the pastures and picking fleeces, on the sheep of course.  And for some reason, my sheep seem to love that attention.  Maybe they bring it on themselves??? 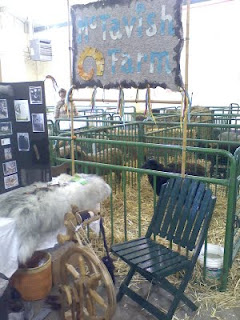 Back from the Black Sheep Gathering.  Every year I think how lucky we are to have such a fine fiber fair in our own town, just minutes from our house.  It was busy this year, showing sheep, fleeces, fiber creations and participating in the spinners' lead.  Tom also presented his first "handcrafted by Tom" spinning wheel!  He has been apprenticing with Magnus Drudik, driving to Salem once a week for the past 6 months.  And now he has something to show for all that work.  It created quite a stir at the show and we spent lots of time retelling the story.  At one point, as my sentences no longer were making any sense, I suggested that he just put that wheel back in the car. 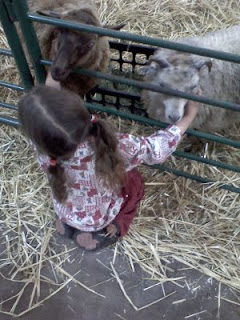 Ninki and Rudy getting lots of attention
People are asking how we "did" at the show.  Well I can say our sheep placed middle of the road in a class of a lot of very fine Shetlands.  Competition is tough and  I guess the judge didn't find anything we had particularly exceptional (of course I beg to differ!).  But we did do well in the wool show, placing 2nd and 3rd in the mature Shetland.  Julia and Strudel came through for us.  I got a blue ribbon on my felted vest and lots of positive feedback from my strut through the spinners' lead.
Posted by mctavishfarm at 9:31:00 PM No comments: