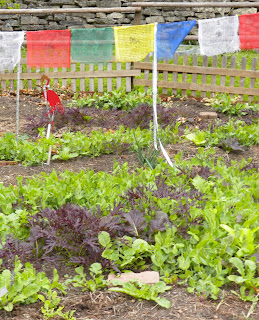 So cleaning out the barn is not my favorite farm activity but there is one consolation...yummy compost. Sheep make a great soil amendment, not the sheep themselves but what they make. All that excrement that accumulates in their sleep quarters combined with straw (adds carbon for a good C/N ratio) helps the garden grow. We pile all the barn waste for the year into a big pile and let it sit for a year or two. No turning, no fuss, the rain, bugs and worms do a terrific job breaking it all down into some super soil. We either spread it on the pasture to help the grass grow for the sheep; complete cycle. Or we use it on the vegetable garden. Sheep manure is one of the best. This year I did some sheet composting and even spread layers of discarded wool (from my skirting of fleeces) under the added compost. Wool breaks down slow but it does release nitrogen (just don't get it tangled in the weed eater!). As you can see our garden is flourishing this spring. The picture of the two piles show how much it breaks down and becomes smaller. Breaking it down first lets all the bugs have their way with it 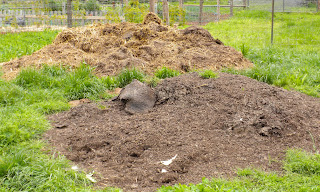 before putting it around your tender plants. If it is not broken down first, I have found the bugs begin to eat the tender seedlings. Also before spreading it back on the pasture, the sheep parasites will die and I won't be giving them back to the sheep. They are happy for that. So as I am shoveling and hauling, I try to think about all the great things that will come from cleaning out the barn, and it isn't so bad.
Posted by mctavishfarm at 1:02:00 PM No comments:

Ok whoever coined this phrase must not have had Shetland sheep as I find this NOT to be the case. Take this morning for example. I had great plans to have the moms and lambs eat down this small, seemingly yummy patch of grass on a fairly small piece of real estate. I basically wanted them to "mow" it. So I put them on it first thing this morning thinking they would be hungry. Well for some reason or other the moms did not like it. They were yelling all sorts of obscenities at me. Things like "this grass has been walked on by ducks", "this grass it too close to the compost heap", oh and other things I probably shouldn't repeat. To avoid the excessive noise I escaped and went inside. My thought was they would shut up if I wasn't there to yell at; I really didn't want to get the neighbors mad too. Well they did quiet down but they still weren't going to eat the grass either, instead many of them stuck there head though the fence, apparently the greenery on the other side was much better. One of the lambs even squirted through the fence to eat my new shoots of raspberries! OMG what a fiasco this was. In hopes of mending my relationship with my neighbors I decided to put these "mad as hell" moms to a different paddock to shut them up. They had won!
In transitioning them to this new paddock, the sheep had to be shushed back into the "waste area", through a "u" turn in the barn and then out the just opened door to fresh grass. The moms new the maze and were out there in no time flat. The lambs however were not so easy. They took a detour to play on their favorite gym equipment and run around the waste area. This waste area is a paddock we put the sheep on when we want them off the pasture so it can rest. A place where we can put them to keep our paddocks from being overgrazed. Well it happens to be directly across the fence from where the moms were now grazing. My thought was these lambs aren't going to be able to figure out the maze when they can see mom directly on the other side of the fence. It had been a week or so since many of them had been there. To avoid upset lambs, I unbungied a part of the fence to open up a temporary "gate". I shushed them along toward it but in doing so they they got a spooked by my funny shushing vioce, and in a great mass went running right past the opening, up through the barn and out the other side, right to their moms. They knew the way! Who was the dummy here?
Posted by mctavishfarm at 8:58:00 AM No comments:

Yesterday it seems the grass finally started growing. Time to get the sheep on it and eating. Up until now the sheep were a bit restricted from the pasture, eating hay instead. We usually have to feed during the late summer (too dry, no grass growth) and winter (too dark, too cold). So right now, YIPEEE time for fresh, green grass. 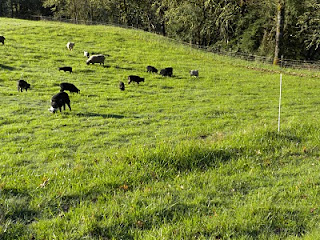 We practice a modified "management intensive grazing" at our place. We have broken up our approx. 6 acre pasture into a series of smaller paddocks using a nauseating system of electric wires. This is suppose to keep the sheep in where we want them and off other paddocks so they can recover and grow. The sh 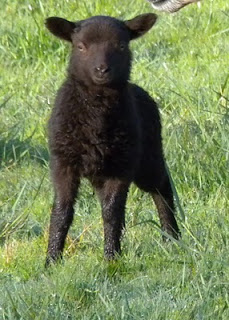 eep are suppose to know this. Well this is the first experience with electric fences for many of the lambs. What we hope for is that they touch the wire with their wet nose (I know it sounds mean), they get a powerful ZAP, and there they have learned the lesson for life, that is, stay on your side of the wire. If they do not learn it that way then we have a few problems. In reality, a sheep with a full coat of fleece, could easily bolt through the fence and feel nothing at all as long as they move fast enough (please don't tell my sheep). If they learn it as described above, we will have a nice working relationship for years to come. Having been witness yesterday, I believe most have learned it. Let's cross our fingers to be sure.
Posted by mctavishfarm at 5:06:00 PM No comments: 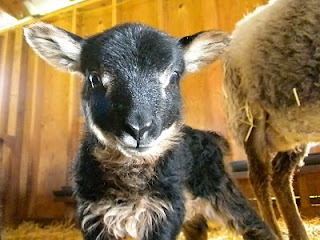 Roonie turns out to be quite the camera ham.

Email ThisBlogThis!Share to TwitterShare to FacebookShare to Pinterest
Labels: "Life is Good" 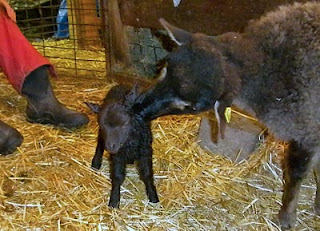 Before bed I went out to check Runa, not really expecting anything, but lo and behold: a waterbag! Runa easily slipped the little girl out at around 10:30. She was not gulmoget but is a beautiful rich red brown. Runa was a bit clueless about letting the lamb nurse so we worked on that and after about an hour we felt that she'd likely just have a single, but after 8 straight boys we were elated! Back in to get a good nights rest.
Posted by mctavishfarm at 1:22:00 PM No comments:

Just a check before bed... 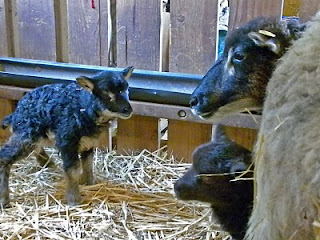 Tracy thought I should just go make a quick check on Runa since she was already comfortably nestled into bed and we couldn't see Runa on the LambCam. Well, I go down there and what do you know Runa had another little girl! This one the spitting image of Runa herself, very defined Gulmoget markings! What a nice Easter finish to this years lambing season.
Posted by mctavishfarm at 12:51:00 PM No comments:

This is for Ashley

What an interesting stump!