Sherman and the Show 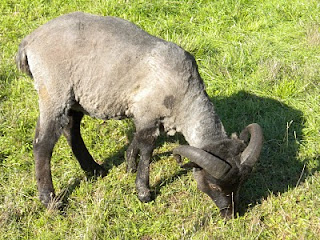 This past weekend we spent at The Oregon Flock and Fiber Festival. We had an interesting experience there which revealed to me what a great group of folks we have that are involved with the Shetland Sheep. Shows are always a bit stressful; the getting ready and getting there, the feeling of over-stimulation with people and activity going on all around, and then the question of your sheep health. We do not make a practice of taking sick sheep to a show, but sometimes it does happen that they come down with some crud while at the show. Well that happened to us at the OFFF this year. We arrived on Friday afternoon to the Canby Fairgrounds with a full load of seemly very healthy sheep. Friday night was uneventful, feeding and checking on them in their respective pens before heading off to sleep. Early the next morning, I went in to feed and ready sheep before our show at 9 am. As I came into the barn I noticed the pen with our 3 rams had a bunch of "yuck" dribbled about, a sort of yellow, brown runny stuff in the water bucket, along the pen rails, in the straw. My first thought was someone had the scours. After checking the outlets of the 3 it did not seem to be coming from any of them or they had gotten over it quickly. But then I noticed little Sherman, a ram lamb, was drooling the stuff all over his front. Yuck, and so soon before the show! After finding his temp normal and a brief consultation with a couple other sheep breeders, we decided he had most likely choked and lost his lovely cud all over the pen. We cleaned him up and off to the show ring to compete against our fellow Shetland breeders. After the show and through the rest of the day, all was fairly normal. But by around 5 pm, as the festival was winding down, I noticed little Sherman just did not look good. Droopy ears, drooling again, and his fellow pen mates were bopping on him, taking advantage of him at a low point, as rams will do. I pulled him out of the pen and took a temp. Humm, low. Eye color was very very pale. I called over a fellow shepherd, a previous vet tech and another, a nurse, both I figure were the ones with the biggest first aid kits and had them take a look. Other breeders came around and no one was quite sure what could be going on. Maybe he got bopped hard and had a concussion. Could be. About the time we were getting stuff ready to poke him with the little guy began to go down fast. He was having seizures and it was all I could do to hold him safe. He looked so bad, I seriously doubted he would survive this. Just then another sheep person offered her services to simply put him out of his misery. Really? I declined thinking he would probably take care of that himself, just give him a few minutes. As he was continuing to seize and more and more of our little Shetland sheep breeder community people began to show up offering drugs, advice and assistance. With their help we shot him with high powered drugs and got a tube down his throat, putting a quart of electrolytes back into the system. I think there were 5 people all working on the little guy with another 5 observing. After a few minutes though things began to look up and he seemed a bit more stable. We made a call to our vet, but knew he could only offer advice as we were a bit out of his local area. We got reassurance from him that we had done the right things and what to continue with. What a great vet! After a brief period of "throwing up", Sherman did continued to improve. I sat with him into the night and was amazed at all the people who came by before bed and talked, expressed their concern and offered their support. I laid in his pen until the wee morning then off to bed as I could see I wasn't doing much for him and we both needed rest. He seemed like he was probably out of the danger zone. Early that morning I checked on him, poking him to see if he was dead but delighted to find that he wasn't. Throughout the next and last day of the show I was warmed by all the people who came by to check on him to see how he was doing. Such concern for one little sheep. It was really sweet. I must say one of the nicest things about having Shetlands is the great community of friends we have. Not sure if other parts of the country have it as good as we do here in Oregon. Of course I am bragging, maybe other folks in other areas do have this too, but ours feels really special and an event like this clearly points it out. We can be out in the show ring competing against each other, but then in the after hours we can pool together and really help each other out. Very sweet! And thank you to all of those that showed they care and support. Sherman would say thanks but he is too busy eating! Oh and all I can deduce from conversations with the vet was that he may have eaten a bad mushroom.
Posted by mctavishfarm at 3:56:00 PM No comments: