This time of year I drive myself crazy trying to keep up on things around the farm.  Grass is growing like mad meaning weeds in the yard explode which means it is time to plant the vegetable garden.   It's also time to mow a few of the paddocks as the sheep are disappearing into the grass.  Even they can't keep up with it.  Grass looses some of it's nutritional value as it puts energy into seed heads and the sheep must find it more bitter and less palatable (I can tell because the yell at me as I come out the door).  Mowing helps knock it down so it might regrow again.  All in all it feels like a losing battle.  I just have to remember this frantic feeling will dissipate once it stops raining. 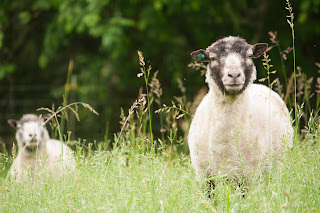 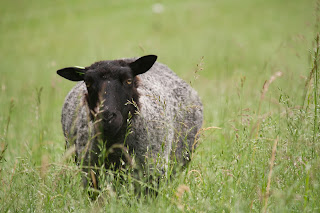 Lambs are growing and we've had some minor growing pains.  Being as we have so many ram lambs this year it means more sets of little horns.  As they learn to manage this growing buddage from their little heads invariably things happen.  Our potentially handsome ram lamb "Spotify" has certainly had his growing pains.  A couple weeks ago I went out to the barn to find one of his horns pointing the wrong way and blood pouring down into his eye and face and onto the ground.  Poor little guy had ripped it off catching it on something, I can only guess it was the hose spigot. Some blood stop powder, hoof trimmers (to trim off the remaining attatchment of horn) and a little pain reliever did the trick but of course he is scarred for life*. " Mr unicorn" my mom now calls him.  Well that didn't last long,  one week later he did the same number to the other horn.  At least now he has a matching set and  he can't possibly do it again!
*FYI once they rip it off it won't grow back, he essentially has done a "horn de-budding" on himself. 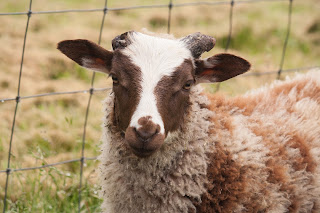 As the lambs reach their 8 week old mark they begin to eat more vegetables;  that would be in the form of grass.  Mamma's milk becomes less rich and they begin to supplement.  This means less time spent playing and more time getting down to the business of eating and then later chewing cud.  Less play means less entertainment for us humans.  But, as we have some much work to do, maybe that's a good thing.