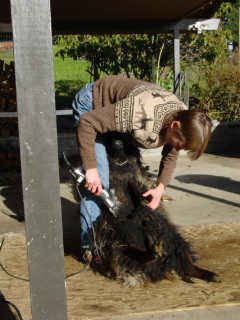 About 5 years ago my hubby Tom and I decided to learn to shear.   Our motivation to take this on was the losing our dear shearer to retirement, how could she do this to us?  We tried out a few others after her but they just weren't the same, leaving our sheep with multiple band aids and fleeces full of 2nd cuts.  We thought we could do better.  So that spring we picked out our victim, poor little Alliette sheep.   She was a smaller sheep, friendly and mellow.  Perfect for practice.  Our intentions were to learn how to do it like the professionals, that is roll the sheep around on the floor, bend over them with the shears and get the fleece off in one piece.  I had copied about 10 pages of pictures of the various positions for clipping from a Kevin Fords Hand Shearing book and set Tom up with sheep in hand.  I thought it would be natural for the "man" of the house to do the shearing and on that first attempt I would look at the pictures and instruct him.
It was two hours later that we finally finished up poor, patient Alliette.  I think the whole fiasco just about broke up our marriage.  I would watch, try to instruct, show him the pictures but then end up grabbing the sheep and doing it myself.  What became apparent was that I was a bit more adept at the process than Tom.  Perhaps I had been observing the shearers more than he and could remember the positions better.  Anyway that is how it evolved.
So for that past two years we have done all the shearing of our sheep, usually around 25.   We are still not to the professional level yet, and I say "we" because we have developed a "two person" technique where by I hold the electric shears, get the sheep between my legs and roll them around like the pro's but then Tom is my helper, grabbing head or legs as needed or he responds to my "grab the sheep" before the sheep pops up and runs off.  We have become quite a team and at best can get a fleece off with minimum of sheep cuts and 2nd cuts in about 10 min.  Lots of improvement since the original two hours.  (Just for a fun fact a real pro can shear a sheep in about 3 minutes.)  Our record for sheep shorn in one day now sits at 9, last year we could only do 4 before my back felt like it was breaking.  Not bad for an ol' gal!
Presently we have finished our ewes and will move onto the rams this next weekend.  Fortunately there are only 4 to do.  Piece of cake!

....it seems this time of year.  First off it is the trees.  They need pruning;  the fruit bearing ones that is.  We have some very old, well established apple and pear trees.  This past couple years we have had quite a haul of fruit from these trees.  Just this last week we ate our last fresh pear.  They preserved quite well just sitting in the dark in the back of our carport, slowly ripening.  I dried quite a few as well, and we continue to enjoy them.  So back to the pruning, I feel obligated to continue this yearly tradition, in spite of all the work.  There are the rewards. 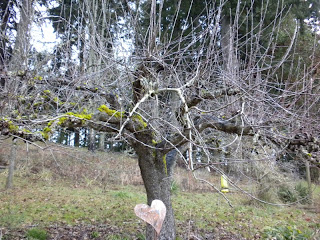 Then there are the sheep, who are quite the hairballs at the moment.  At feeding time I find myself "oogling" the lovely fleeces of the ones who allow me.  I ponder the relative softness, luster and color of each, and wonder what they might look and feel like in a final project.  Of course I cannot, repeat CANNOT keep them all!  My first priority is their sales.  I have plenty in my fiber closet at present, plenty of potential projects.  So please, if you want to help me limit my fiber accumulation let me know which type, color of fleece you might want and I can put your name on it.  Come shearing, which is just around the corner, you will have a lovely, soft pile of someone's winter coat ready for your own project.  Haircut time is near! 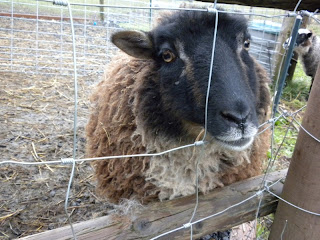 This is Runa.
She wants to be first on the shearing list.
Posted by mctavishfarm at 8:26:00 PM No comments: