Hurray!  We have finished and can now rest through the night, well except for the feeding of little Rikki  (but she is so cute it's hardly a bother).   We ended the season with 10 ewe lambs and 6 ram lambs (compared to last year where we had 4 ewe lambs and 11 ram lambs).  All are healthy and bouncing off the walls.  We only had to assist with one birthing.  That was with Aurora who had triplets and unfortunately one of the lambs had died and was trying to be delivered shoulder first.  Lambs generally do assist in their own birth but when they are dead that makes it more difficult.  Tom and I were pleased to be able to right the situation and get out the other two quickly, no vet calls (yes!).  She had a girl and a boy.   All are doing well.

A nice feature of this lambing is that we did not have any middle of the night issues.  All lambed at reasonable hours.  The early morning ones, around 4 am, did it all by themselves and had babies fed by the time we made our barn check at 6 am.   That included Strudel who had triplets!

So little Rikki now has a new, doting mother.  That would me none other than my mother.  It is the grandchild she will never have.  Rikki now wears diapers and is tromping around her house.  Mom's cats think she has lost her mind.  Rikki is doing well with the bottle and traveling in the car in a cat bed.  Yes a very spoiled little sheep.  My only stipulation is that she is brought back to the farm on a daily basis and given supervised playtime with the other lambs in the barn (sin diapers).  I do not want her to forget she is a sheep! 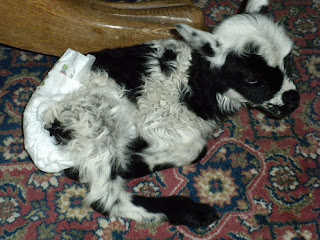 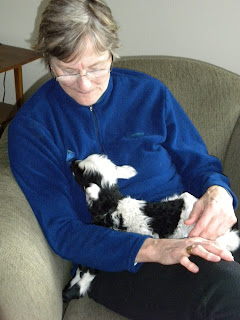 So Miss Rory had her 4 lambs but decided this one cried too much so guess who gets to take care of her.  She was 3#6oz at birth (her brother and sisters were around twice that much).  She has taken well to the bottle and now weighs more like 4 #.  She follows me around very closely, and yes she is now coming in the house! Wait until Tom gets home. 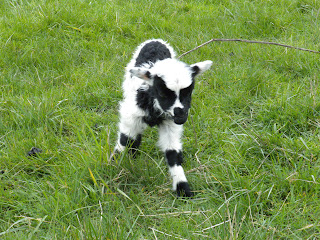 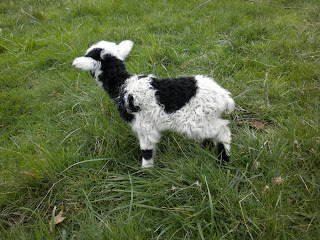 This is our very first bummer lamb in the 10 or so years we have been doing this.  Since we still have a few ewes to lamb I am hopeful one might adopt her.  We shall see.  In the meantime she is getting lots of love and sleeps in my lap as I write this.
Posted by mctavishfarm at 3:44:00 PM No comments:

Rory has a Party

At day 145 Rory decides to go into labor conveniently in the late afternoon, shortly before I am heading home from work.  Tom was in charge that Friday.  By the time I got home she had just delivered her 2nd lamb and was busy cleaning it up.  But then another came. Three on the ground, we are scrambling to get them nursing then another water bag appeared.  OMG a 4th on it's way.  The first three were girls, the last a boy.  It was a challenge making sure they all had there first drink of milk and knew where to find it.  There were lambs everywhere, hard to keep them all straight.  But they are a nice variety of colors, don't you think?  Now to figure out how to take care of all them.
This is the first time we have ever had a "litter" of this size.   Singles and twins are the norm, at least once a year we have a set of triplets.  But this is insane.  There is definately a little supplementing of food that will have to happen. 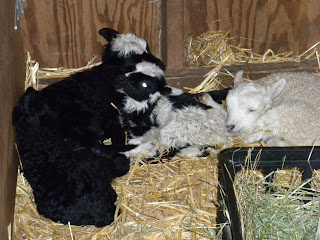 This is a picture of Rory taken two days before. 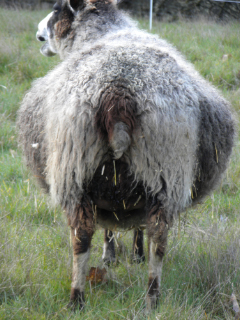