The Sheep are Growing Feathers! 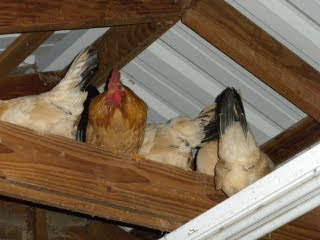 This fall we acquired some new additions to the farm, some young Japanese Bantam chickens. So far they have settled right in and are doing the job I intended for them. I thought having a few chickens pecking around the pasture might be a good thing to help decrease the parasites which affect the other beasts here. The problem was keeping them away from the predators. My friends who have chickens lock them up at night in fortresses to keep them safe from the wild creatures, namely raccoons and skunks. Being a bit lazy, I was not ready to invest the time and energy into that plus adding another chore to the day's list. Then I learned about these little bantams. Several of our friends have them and have had a hard time keeping them from madly multiplying despite treating them as feral. I was then fortunate to get some, maybe my good fortune as well as my friend's.
When I got the little critters I wanted to imprint them to the barn. My first attempt, leaving their cage on the floor of the ewe barn for a couple days, resulted in failure. They did not return to the barn to roost, preferring the trees near the pasture. One by one they disappeared (chickens can't see at night and I suspect the raccoons were picking them off). From my chicken friend I was gladly given a few more . This time I placed the cage up a bit higher off the ground in the barn for their imprinting. Wasn't sure what would happened when I let them out but they seemed to get the idea. In affect they are basically free roaming chickens, all the time. They roam and scratch around the pastures during the day (who told them to stay out of the vegetable garden?) and return to the barn to roost at night. Perfect! Now all I do is throw some scratch out for them and they are on their own. The pictures here show them in the rafters above the sleeping sheep. On cold nights the sheep help keep them warm. So for now the only problem seems to be that the sheep are now wearing feathers! And of course, the question will be, what to do in the spring when they start laying eggs. Oh well, we will deal with that problem later. 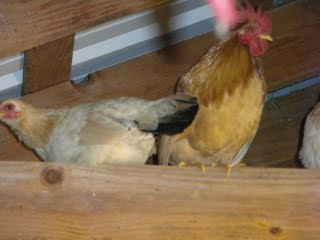