It seems we are always redoing fences or mostly just adding to them.  Just when you think you have the perfect set up there can always be a better way.  In looking at our ram area we could see some potential pitfalls including one length of funky electric netting super entangled in weeds.  Not so secure if the electricity goes out and some ram gets smart.  In hopes of making our trip this fall (a.k.a. breeding season) and leaving the farm to our sitter, we thought we should look close at our ram area and this particular length of fence.  See, they sense when you are away.  They will make escape plans and break out just as you are the farthest away from the farm.  They would love to break in with the girls and have a big ol' party.  So to thrwart their plans we decided we needed to replace this section of fence.
Most Shetland breeders we know, us included, house rams in separate quarters from the ewes for a couple reasons.  Firstly in order to register lambs with NASSA (North American Shetland Sheepbreeders Assoc.), we need to know who the sire is.  Secondly, as we like to spend time with our babes and ewes, petting and the like, having a ram in with them can be a bit dangerous;  just look at those horns!  So our rams are kept at opposite ends of the property, with many fences between them.  So far we've only had one escape (of course while we were away;  you can get the full story from our neighbors) but no reprocussions (that would be lambs).   We'd like to keep it at that.
Once we decided we needed another fence (or maybe it was just me) the question was, who will build it. Tom, the fiscally prudent one of the family as well as the talented builder/fix-it/handy dandy repair man, usually does the deed. I had some hope in my mind that he might decline this job, as much as I like his fences, he just doesn't have the time lately to actually finish something like that. Tom, on the other hand, is Mr. optomist and, not really being all that in touch with his calendar, is usually inclined to say yes.   So when I broached the subject with him, my fingers and toes crossed,  I was pleasantly surprized to hear "how about Greenhill Fence Co.". YES! 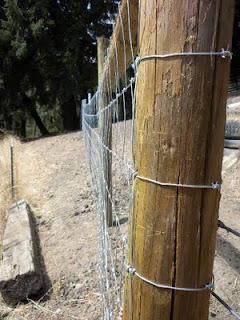 I called them and within in a week they had a new ram fence built and ready for use.  Now our rams are happily (at least in our opinion) contained in their ram area.  They can loaf around on the hillside and look out yonder in the far distance at the girls.  If they try to escape, they will have to really work at it.  And this Fall we will leave the farm to our sitter with no worries and no middle of the night phone calls.  Cross you fingers!