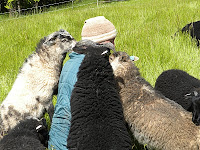 So as you can see it is no longer possible to sit in the pasture, wine in hand and enjoy the lambs. They are no longer enjoyable! They are too big and bordering on obnoxious! The girls, there are only 4 of them, are still super cute and fun to pet. But all these boys! They paw you with their sharp hooves, step on you and climb up your back as if you are some sort of mountain to scale. They chew on your hair try to drink your favorite beverage which ultimately gets spilled. We usually have our boys under strict rules, no stepping on us, no head butting, but this year we have found it impossible to enforce them. They are OUT OF CONTROL! Last time we were out there I could only stand about 10 minutes before wanting to seek refuge. Guess we don't have to worry about our lambs not being friendly. 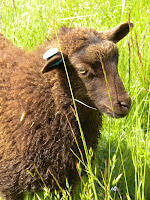 This is little Ninki, actually her name is Ninkasi. She was named after the great brewery in town, it actually means goddess of fermentation. I thought it was a perfectly appropriate name for a sheep as that is what they do all day. So until she grows up she is referred to as "dinky Ninki".

Do you see any sheep in this photo? They are there. If they don't get to eating they will be burried in food! We have begun mowing 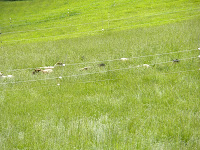 like mad as the grass goes to seed so fast and then looses much of it nutritional value. We have noticed too, if you can mow it at the right time, hopefully before a good rain shower, it will grow back with more leafy good stuff. Of course once the rain stops for the summer it dries up to nothingness and we are left with having to feed hay. Unless one has irrigation, it is a short growing season around here.

As we only had 4 ewes lambs this year we only have one left to sell. That is beautiful Margo, who you can see at the top. She will be our little show girl at the Black Sheep Gathering coming up here in a few weeks. We do have lots of ram lambs left, however, and always the possibility of a wether. Hurry they are going fast! :-)

Email ThisBlogThis!Share to TwitterShare to FacebookShare to Pinterest
Labels: lambs 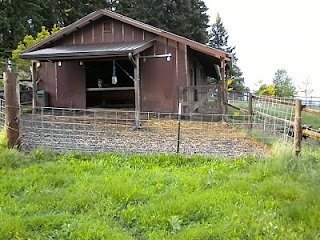 It has taken us awhile, let's see, about 10 years but we now have evolved to the point where we have a wonderful system for catching the sheep. I hate rodeos, especially where my sheep are involved, but it seems that is how it has been up until this year. Yes, periodically you do need to catch the buggers; to shear, to worm, to trim hooves. And yes you need to catch ALL of them, not just the super friendly ones. One thing about sheep is that they have an innate sense of when you want to do this and suddenly they scatter, wanting no part of you. Our dog, with some border collie genetics, is no good; after being pummeled by one of our precocious ewes he no longer likes the sheep and avoids them at all cost. So it is up to us humans to find a way to catch the sheep and preferable not in rodeo style.

Things I have learned about sheep. Sheep easily go uphill; it is much easier to coax them to go up rather than down. It is easier to get sheep from a big space into progressively smaller spaces rather than going from a big space to a very small space; they just don't like it and will scatter in many directions no matter how many helpers you have. Sheep like to follow fence lines and like to go around blind corners. I have no idea why, but it is quite easy to herd them to a wall that they can go around and then be out of site.

With all these factors put to good use we have finally come up with a system for enticing our crafty little sheep into the barn and putting them on lock down. We start with a little food, sweet cob is always good. The sheep go in the barn to eat. I carefully sneak around the side, close up the corral outside the barn. At this point a few nervous Nellies come running out of the barn to investigate, usually scaring the lot of them into doing the same. I calmly continue to step closer. To avoid me they go uphill into the fence, around the solid barn door, around a set of feeders, and meanwhile I close the barn door and, what do you know, all sheep are now safely locked intside. I can now singlehandedly get ALL the sheep trapped in the barn ALL by myself in about 3 minutes flat, and no rodeo!
Posted by mctavishfarm at 5:31:00 PM No comments: 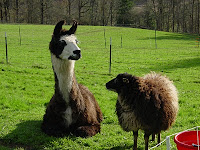 We have some other members of McTavish Farm you should meet. To the left is our llama Pele. He was hired to protect the sheep from predators like dogs and coyotes, which we know are around here. Llamas probably aren't a match for cougars or bears. So far Pele has done an outstanding job as we have not had any attacks.

This is Clancy. As you can see he brings humor to the whole operation. Over the past few days however he has been an asset to the lane as his barking is keeping a visiting bear at bay. Our neighbors on either side have lost their bee hives to the bear with a sweet tooth. We put Clancy out in the evening and he has been running in the neighborhood and barking, hopefully keeping the bear out of the nearby chicken houses. Let's hope the bear finds a new home soon. Keep barking Clancy! 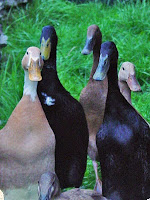 These are our ducks. I know you see a faint resemblance to a bowling pin, but no, these are ducks, Indian Runner Ducks. They do not fly but motor around on two legs. They move together as a group, or as a friend says "as one big duck". They are very social. The ducks were brought on board to eat the slugs and snails and have done a fantastic job. Not only do snails feast in our garden, but they are a host to the liver fluke worm that affects sheep. So the ducks are multi purpose, they make our garden grow better, keep the sheep healthy, lay yummy egss and, on a gloomy rainy day, they make you smile. 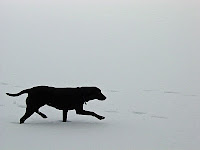 Last but certainly not least is Sasha. She is our oldest member at 12. She was a rescue dog and has been great. She doesn't really have a job per se, but is a great companion, for both human and for Clancy. She is great with everyone, kids included. She is espescially warm to anyone with food. She is one dog that could find food where others thought there was none. Her favorite "move" is to tadpole on her belly though the grass.
Posted by mctavishfarm at 5:25:00 PM No comments: